On the morning following our arrival in Bruges, we had breakfast in the establishment in which we were staying. It was a hearty meal, rather more than that to which I was accustomed, consisting of cheeses, cold meats, bread rolls and croissants, not to mention tea, coffee, juice and yoghurt. We even had soft-boiled eggs on three occasions. In short, we were right-royally fed, always aware of the warning hanging on the inside of the door to our rooms. 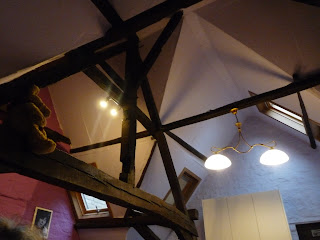 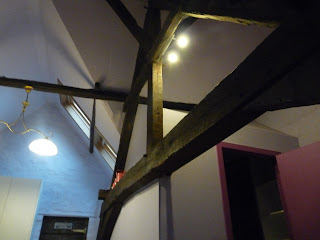 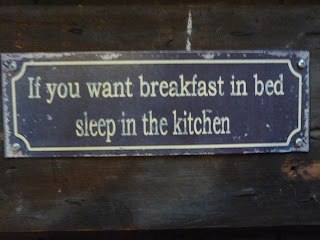 I ate sparingly as is my wont, and the landlady suggested we took what was left of our breakfast with us for lunch. Well if we didn't eat it, I thought, the ducks and swans certainly would.
Off we then went into town to find what we would find, always bearing in mind cabbage soup (as if I needed reminding) and that our route, therefore, needed to be chosen with care. Our first port of call was an apothecary from whom we purchased some mysterious liquid designed to damp down my cough. It was a delightful, olde worlde place with.......well you can see for yourselves. 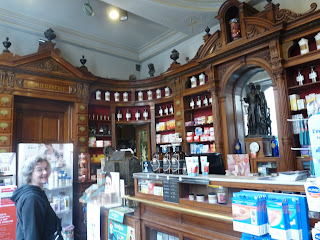 Moving on, we entered one of the two big squares in the city where we happened to find a museum which sported some superb public facilities in the crypt. Now I am unaccustomed to using public loos. Having tentatively placed a 50 cent piece in the slot and approached the three-pronged barrier with some suspicion, I was dismayed to find that the barrier had turned, leaving me on the outside; most unsatisfactory. I tried again, but determinedly braced my legs to prevent the mishap occurring again. Success!
In France, it is not unusual to find the 'gents' and the 'ladies' in the same area. Not so on this occasion in Belgium. Now this fact had not imprinted itself on three delightful ladies, including Lucy, who having paid their dues entered this bastion of male privilege. I felt that I needed to point this out to the ladies. I have to say that no-one was in the least bit fazed, in fact one lady all a-giggle and a-titter said,

"Ooooh, what an experience!"

Now I swear, dear readers, I didn't do a thing except wash my hands. Anyway, I ushered the ladies out, pointing the way to their own facilities. I must add at this point that the facilities supplied by the local restaurants were equally good, at least the three or four that I was obliged to visit were.
There is no doubt that as far as food and drink were concerned, we had been spoiled in Amsterdam. But never mind, holidays consist of more than just eating and drinking I stoically told myself. There were, however, one or two highlights that I must mention. The first was an accidental discovery of a delightful bar-cum-eating place that was reputedly the oldest such watering hole in Belgium, maybe the oldest in Europe the smiling young waitress told us. Once again, it was delightfully old-fashioned in that might have leaped directly from a Rembrandt canvas - well almost! Here are one or two slightly blurred shots of the place, blurred because they were taken in a hurry so as not to offend the other eaters and drinkers. 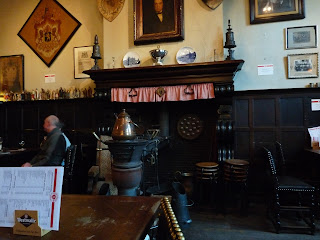 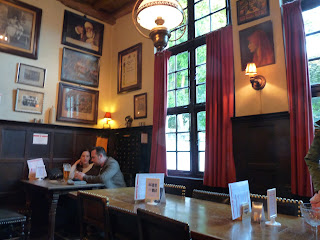 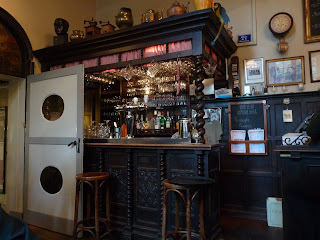 The other place of note was an old bar, where we stopped off to have a whisky, my having declined to finish the one in the restaurant we had just vacated. (Should have had a health and safety warning attached to the bottle!) 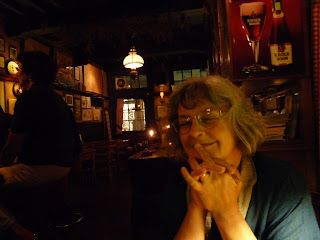 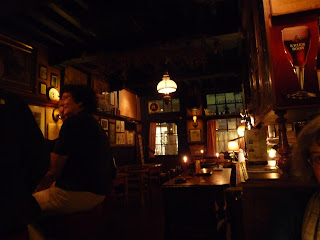 Now lest it should be thought that we spent all our time feasting, we did visit other places of interest, such as local folk museums. They really were quite fascinating. 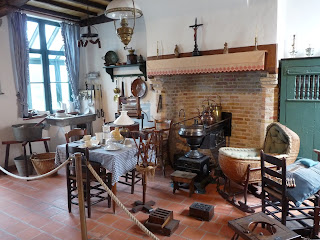 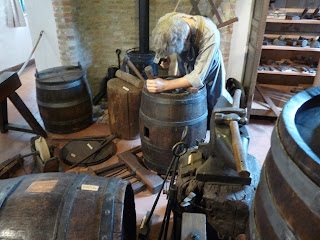 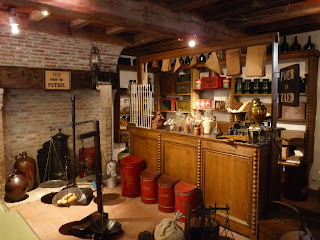 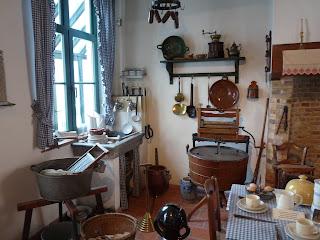 It will no doubt, be observed that the whole city was in a remarkable state of good repair. A great deal of pride for their city was plainly on view. 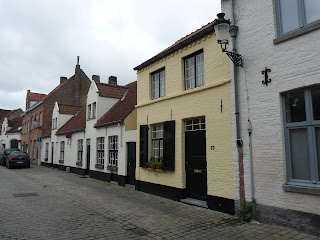 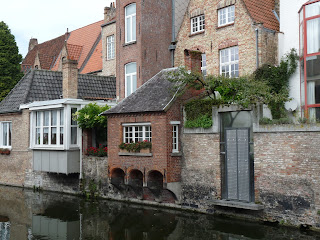 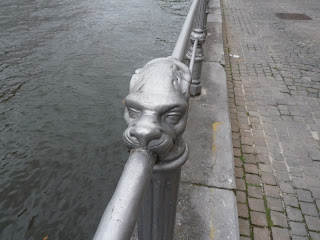 When, at last, our time in Bruges was drawing to a close we had one last meal of Angus beef with trimmings as a celebration. Beyond that I will say no more, but rather choose to take you along with Lucy and me on a night-time trip of the canals. 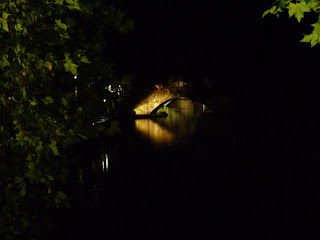 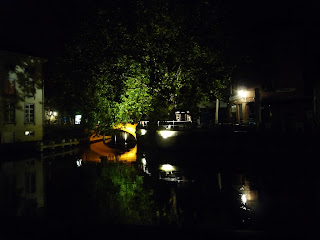 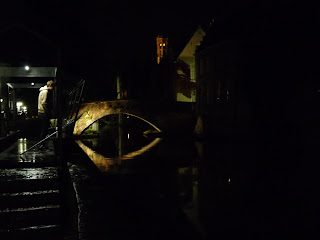 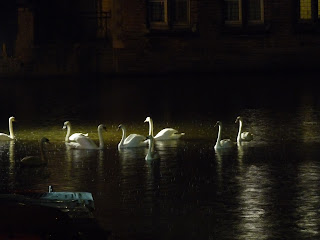 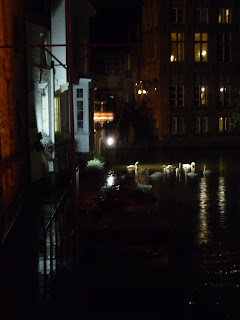 So our holiday came to an end. The following morning would see us wending our way, by bus, to the railway station and thence home. It was a fun time regardless of the down times, but then a holiday isn't the same if everything goes to plan. We have very fond memories of Amsterdam and Bruges, and can recall with some laughter the times when things were a little oops-ish.