Now it might seem that having written about my experience of surgery on my right eye that there would be nothing of consequence to say about surgery on my left eye. Essentially this is true, but what was very different was the feel of the day.
It began much as on the previous occasion some six weeks ago. The usual palaver of disinfectant showers and eye drops was gone through, including the tremendously satisfying breakfast of one glass of water. Then off we drove to 'la polyclinique', arriving a little before 10am. The building is a rather low, spread out rather than sprawling affair, sitting in the middle of the French countryside. As its name suggests, it consists of a number of theatres used for various aspects of surgery, and their supporting administrative networks. Anyway, the usual paperwork was quickly dealt with, and having found the correct waiting room without any trouble, we were ushered into a private preparation room. Strictly speaking this was not a private room at all, but one designed for three patients at a time. However, on this occasion, we had the room to ourselves, other patients being shunted into their own communal room.
Once again I changed into theatre garb, was a little disconcerted by the apparent fragility of the knickers stitching, then helped up onto a waiting trolley as I prepared to meet my fate. Well one has 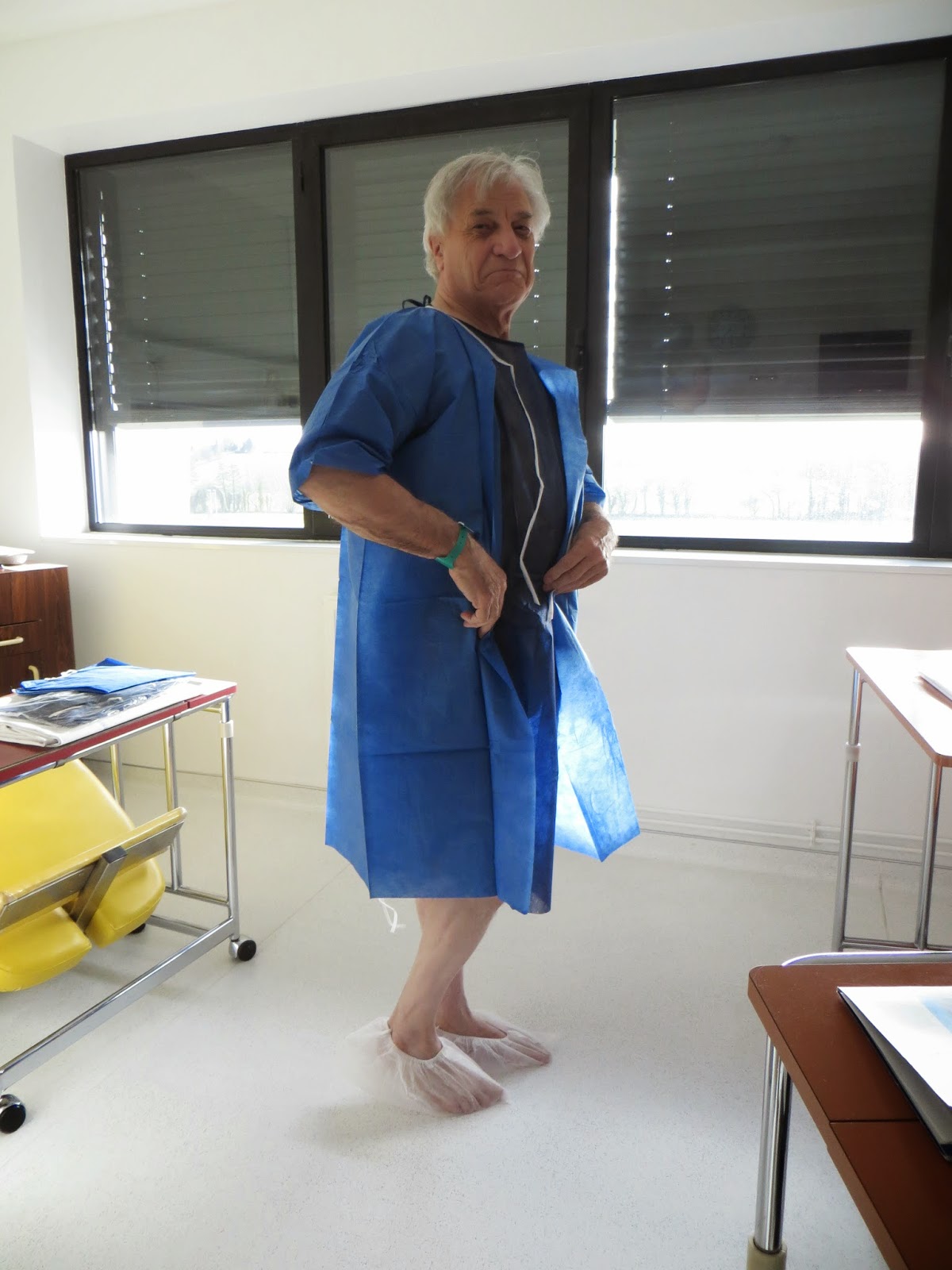 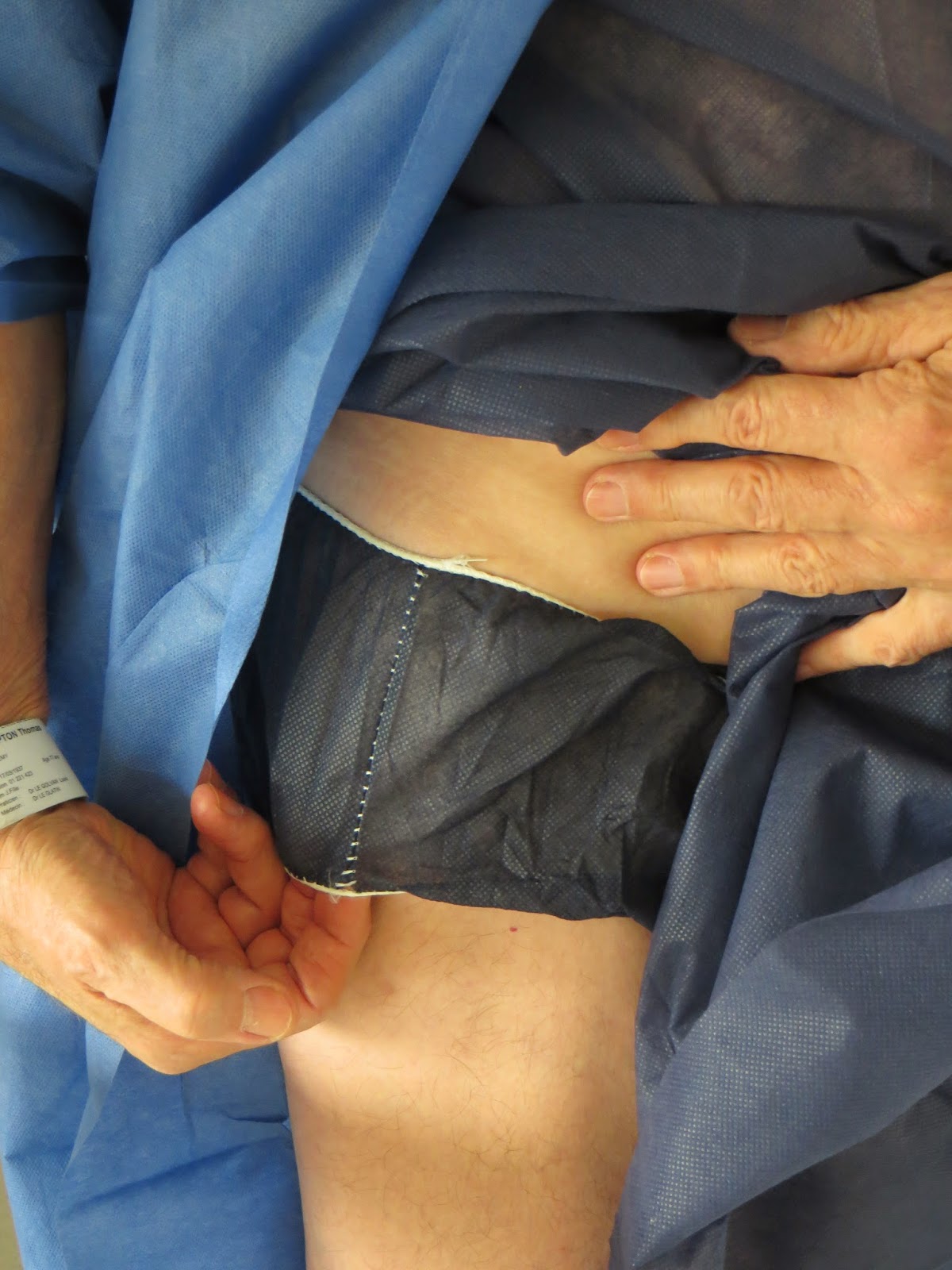 to have a little drama! Having been through the process once already, I had no concerns whatever about the imminent surgery. Yet as the orderly wheeled me away, I whispered to a smiling Lucy, "I feel nervous." (This experience of nerves, for which I had no conscious reason, was later confirmed when I discovered that my blood pressure was higher than it was when the whole business was finished.) As I travelled deep into the interior of the establishment, I noticed that everything was much lighter than before, as well as being far less crowded. Even the operating theatre itself was lit by natural light from a wall-length set of windows. It was this heightened sense of reality that was so different from before. But I am getting ahead of myself.
I was determined to check my time-wise progress through the day's events and noted that I had left the preparation area at about 10.30am, the same time as on my previous visit. I arrived at the pre-op waiting area where I waited for five minutes before being wheeled into the theatre. Now this is where things began to go a little weird. The process of being swabbed, disinfected, and hooked up to the Borg Collective (see previous post) took about fifteen minutes. During this period, I and the theatre nurse indulged in a little faltering French and pidgin English discourse. Nothing too profound, you understand, just odd remarks about being, "nice and clean; nice and clean." "Oui!" said I. Well what else could I say? I couldn't actually see the results of her ministrations.
When all was ready, the masked surgeon approached, peered down into my right eye (the one which had already been 'fixed'). I looked up at him in what I suppose might be called a rather alarmed fashion. In response, his eyes crinkled into a grin as he tapped the cheek under my left eye. I guess that is what passes for surgical humour! Get the patient worried, and it's a fun experience all round for the staff. I didn't find it laughingly funny at the time I can assure you, my sympathising readers. You are sympathising aren't you?
Once again, the surgeon (he is actually a lovely guy) placed the blue cover over my face, as the machine automatically took my blood pressure - I think. Well one just cannot be certain of anything really. Okay, back to the blue cover. Was the correct window going to open? Was he going to forget and open the right-hand window? This and so many thoughts flooded through my brain. Then I heard a little scratching sound, and the shadow of two curved prongs above the covered left eye. "Steady on sunshine," I thought, "you can poke someone's eye out with those." Well, fortunately, that didn't happen, and the operation began in earnest.
It seemed to take an inordinately long time to do the business, with copious amounts of cool liquid sloshed in at intervals. One had visions, not literally of course, of boiling humours of the vitreous and aqueous variety, caused by heated lasers being frantically calmed down. Finally came the welcome 'patching and strapping' that heralded the imminent departure from the theatre.
"  'Alf an 'our you stay 'ere," said the post-op nurse, also solicitously enquiring whether I was in pain. That was a question repeated by other staff from time to time. What was wrong? Was something evident that I was not sharing in? Was I missing out somewhere? But then, sure enough, after 'alf an 'our, I was returned to my private changing room. So what had happened to the passage of time? Had I passed through a time warp? Adding up all my estimates of time passing (based largely on data collected from clocks which I could now see), there was time unaccounted for. Not only had I spent longer in the theatre than before, but also left the clinic an hour earlier than expected. But yet again I am getting ahead of myself. 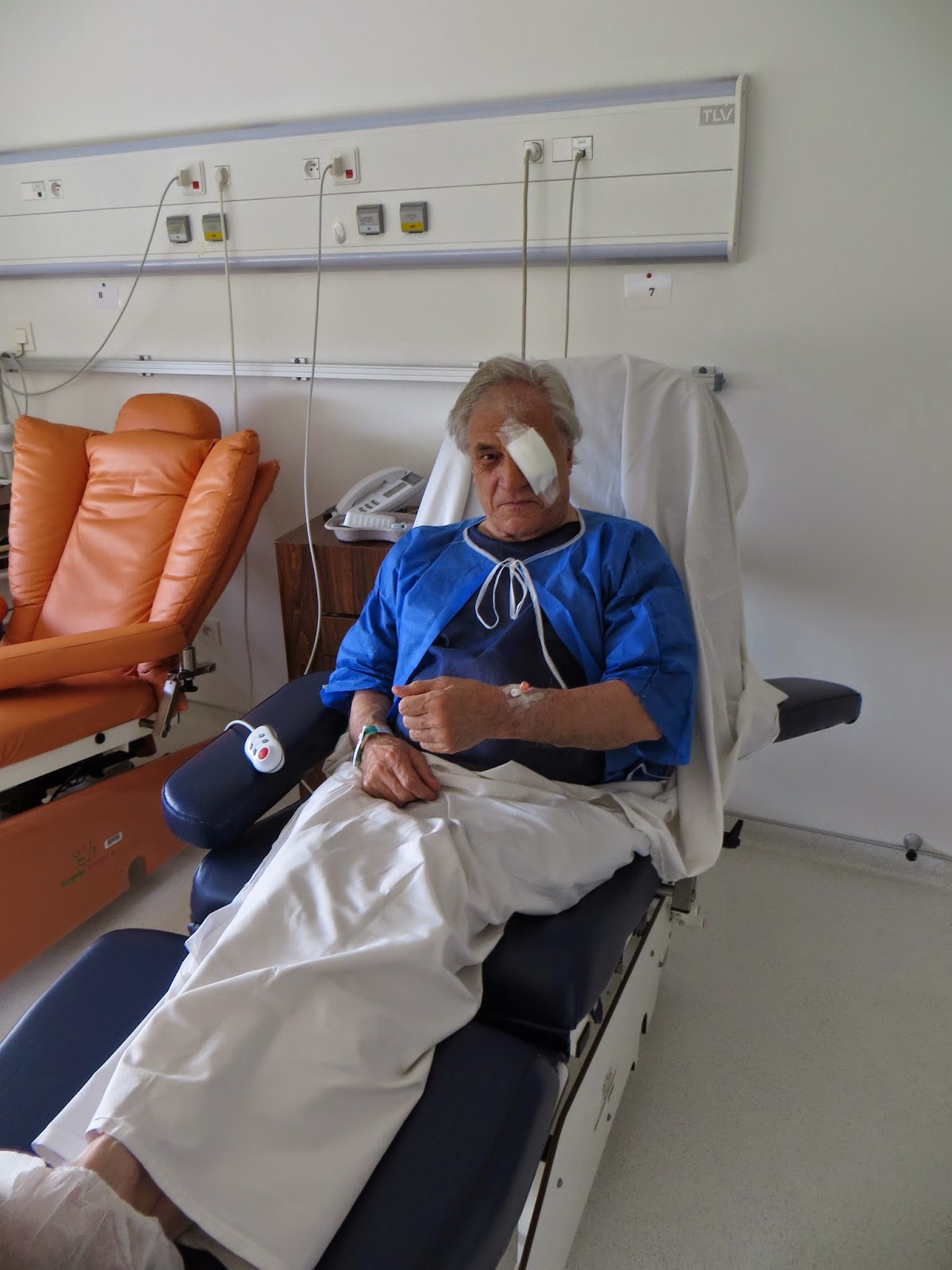 I arrived back in my private room where, after some delay, my blood pressure was taken again, and I was allowed to get dressed. Somewhere on the way back from surgery I lost my theatre cap. No, you wouldn't have liked it. After another half an hour I was allowed some much needed refreshment. Lord, was I hungry? 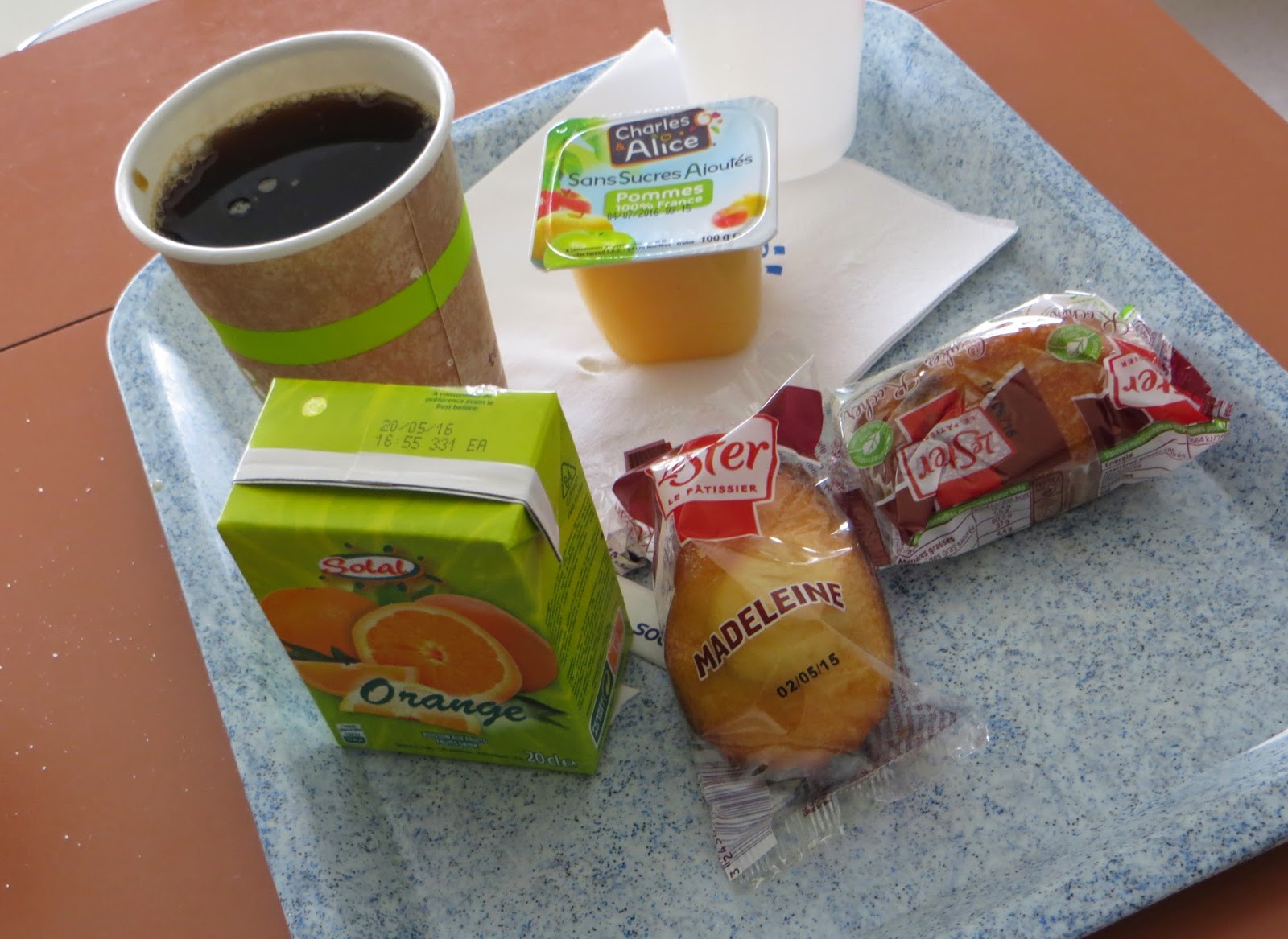 When all was nearly completed, along came another nurse to remove that pointed thing stuck in my wrist. Now I am sorry if the next bit of the proceedings doesn't elicit the mirth that followed the removal of metres of strapping the first time round, but as you can see this time the attaching tape had been applied with a delicacy not experienced heretofore. It was removed with only a sharply indrawn hiss of breath, and I was free. Free! 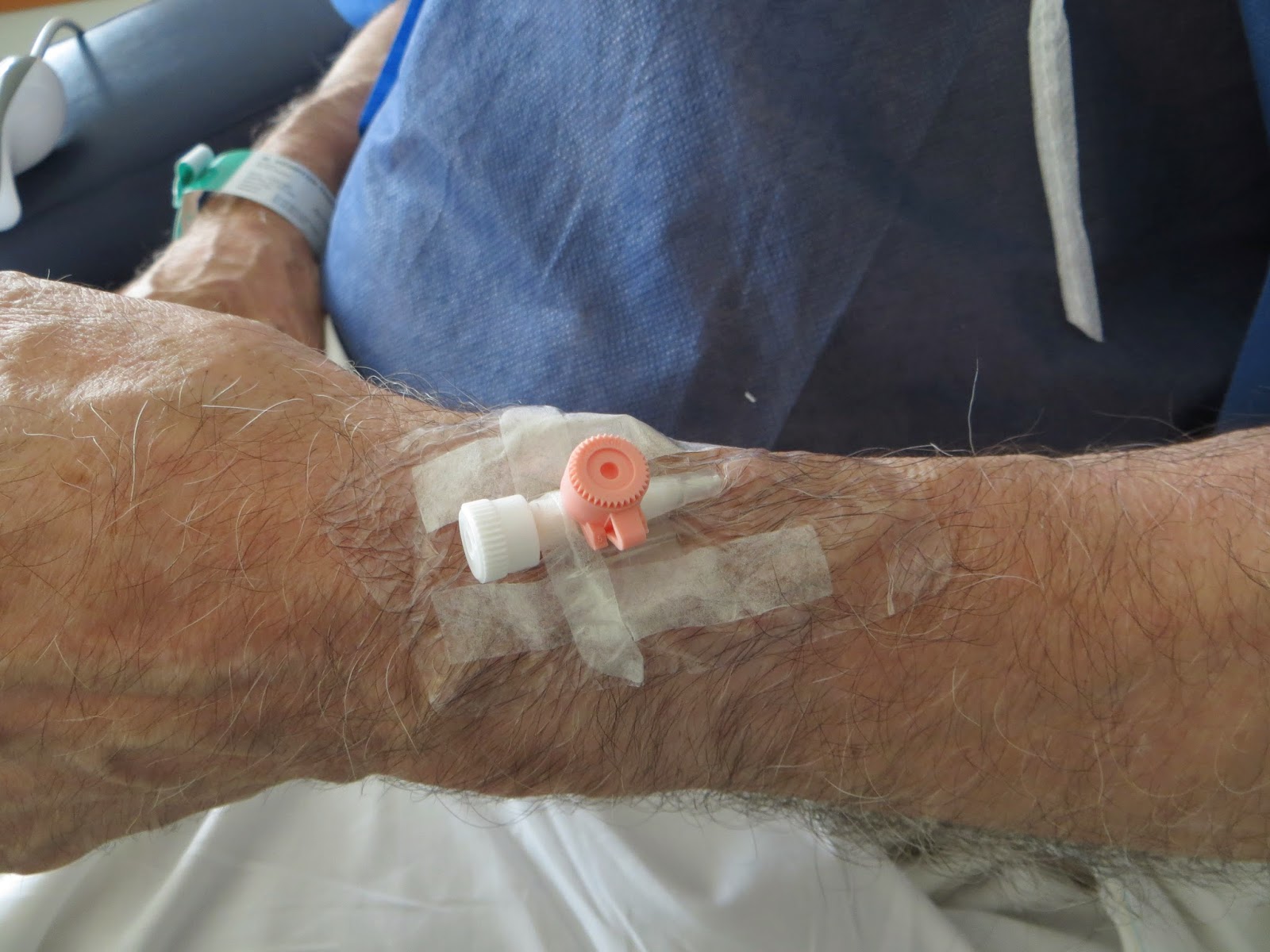 Update:          I saw the surgeon two days later, and he seemed satisfied with his work. Lucy, on my behalf, did point out that my right still seemed to be 'foggy' from time to time. In the surgeon's opinion, this was because I am English and it's always foggy in England. It just goes to show that you can't keep a good comic down.
My left eye is recovering more quickly than had my right eye, probably because I am not taking anti-inflammatory eye drops to which I have an allergy. I have dug out an old pair of 'distance' glasses which allows me to read for reasonable periods. Unfortunately, that boon does not extend so readily to the laptop screen. But I have no complaints. All is going well, or was going well until I slipped on our wooden staircase and broke my fourth toe, earlier today. It looked 'orrible until we strapped it to its neighbour, and decently covered it up. So once again I have the chance to say,

"Oh the pain! Oh the agony! But without any loss of fur....only my dignity and mobility.

Oh yes! I forgot! I took the car out for a drive yesterday. That was great!
Posted by Tom at 20:56