Had Charles Dickens been writing about my father in "A Christmas Carol", instead of Marley, he might well have said,

"Father was dead, to begin with.  There is no doubt whatever about that.  The register of his burial was signed...........Father was as dead as a door-nail...........This must be distinctly understood, or nothing wonderful can come of the story I am going to relate.........He had been dead these seven eleven years."

In every ending there is a beginning;  in every beginning there is an ending.  However, the apparent ending and beginning may not be coincident with the real event, which may lay hidden deep in the underground of the mind.  Although my father was dead, the effects of his parenting, as well as my mother's of course, were to linger on for many a long year.  The perceived damage to both my childhood and later adult life was, and has always remained, my responsibility to deal with.  First, however, had to come consciousness and the removal of denial.

There sometimes come moments in life when one feels urged to give out a 'statement of intent'.  I must do this, become that, or deal with....whatever.  In effect, a new beginning is initiated.  Of course that new beginning may simply be an old beginning which has surfaced in a different guise.  Another and related event may be a 'statement of what is'.  Those two statements may be so inextricably intertwined that it is difficult if not impossible to distinguish between them.  Now whereas the former statement clearly heralds an intended beginning, the latter appears to be a yet-to-be-realised state, the presence of which may only be inferred by the sense of something powerful bubbling up from the underground of the mind like a refreshing stream of life-giving water.  The end-point, that 'statement of what is', may take many years, to reach the light of full consciousness.  It seems to me that I have spent large parts of my life in that state of catching up, of bringing into realisation statements of 'what is'.

In my late twenties I decided to reject God utterly.  That was my 'statement of intent'.  It was never part of that particular scenario to 'choose not to believe in' the existence of God.  Such a choice would have seemed eminently nonsensical, as indeed it would today.  Surely, unbelief comes of its own volition;  one realises it is there only after it has arrived.  It doesn't come from a choosing.  So, I never became an atheist but could see that atheism was as valid a creed as any creed advanced by religion.  It seems to me that in many ways, atheism and religion are simply the two opposite sides of the same coin.  The plane of separation lies in the unattainable definition of God.  Neither philosophy has any lasting value if they are not allowed to develop.  They need to be part of a process of becoming, on the way to somewhere else that is ever closer to Truth.

The real wonder of my tale (as Dickens might have said) lay not in the intended rejection of the God of my childhood, for as it transpired that was bound to happen anyway.  Rather it was that within my original 'statement of intent', and far beneath the surface of my mind, lay an acknowledgement or warning of the existence of another, but false, God.  It was that other god that needed to be rejected.  That other god so clever, so obsessionally intent on its own survival, and operating with all the subtlety of the biblical serpent, is a master of disguise and denial.  Because it had so effectively diverted my conscious attention onto the fictitious God of my childhood, I did not see until long afterwards, until that 'statement of what is' began at last to be revealed, what the nature of that false god was, that virtual image with which I had chosen to identify myself.

In seeking to rid myself of what I assumed was the dominating influence in my life, the God of my childhood, I seemed to have attacked the false god also, a kind of psychic/spiritual lateral damage.  Nothing could have prepared me for the shock of great loss, of the feeling of desolation and loneliness, and the unremitting, inner darkness and sense of annihilation.  It was a terrifying revelation that the death of my father had never shown me.  It was almost as if my relationship with God, even after all that time, was closer to and more important than my relationships with my biological parents.  What was that false god that had the power to wreak such desolation and despair?

It was my own ego, built up over a lifetime and having its roots far back in my early childhood. That entity had been fed and fostered by a religious system and its adherents that acknowledged no God except humanity's ego writ large across the cosmos.  But my ego didn't die way back then.  It returned  stronger than ever, and would continue to do so until it was correctly identified.

As for the Christ, that sadly misunderstood figure to whom so many claim allegiance, he has had no chance, no chance at all.  However, that is yet another tale to tell.

"Father was dead to begin with.  There is no doubt whatever about that...........He had been dead these seven eleven years."  Or had he? 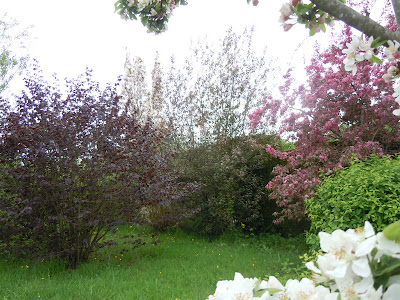