Anyone Fancy a Curry?

I am finding it a little difficult settling down to writing a script on the kind of subjects which particularly interest me, namely matters of the spirit. In part that difficulty arises from a gentle seething inside me, a mild excitement if you like, which in turn arises from a new awareness of an experiential truth written about in my previous post on purity of heart. So instead of trying to produce when I need to reflect, I have decided to try my hand, yet again, at a watercolour painting.
Now this an exercise which has always been fraught with difficulties for me, a project which produces partly finished (or even barely begun) paintings which I quickly fall-out-of-love with, as a result of not getting things right, the way I want them. Thus it is that my efforts almost invariably end their days in my waste bin. But 'hope springs eternal' and so once again I take my brushes in one hand, and something resembling courage (or is it obstinacy?) in the other, and attempt to do battle. This time, however, I was determined to have some fun.
It just so happened that whilst on one of our short holidays, we happened to espy an attractive Indian restaurant. Now this is nowhere as usual in France as it is in the United Kingdom, a unity which may, perhaps, not last for very much longer. Ever ready to support restaurants which specialise in foreign cuisines we entered and were offered a table for two.  I surreptitiously took a few photographs of the interior décor for future reference. The following are the results of the inspiration accorded me by a lovely evening sharing a curry with my lovely wife.

First I show a simple line drawing developed from certain features that I found of interest. This line drawing is a composite of three bits and pieces, produced so that if one part was ruined, the rest would avoid a terminal visit to the waste bin. 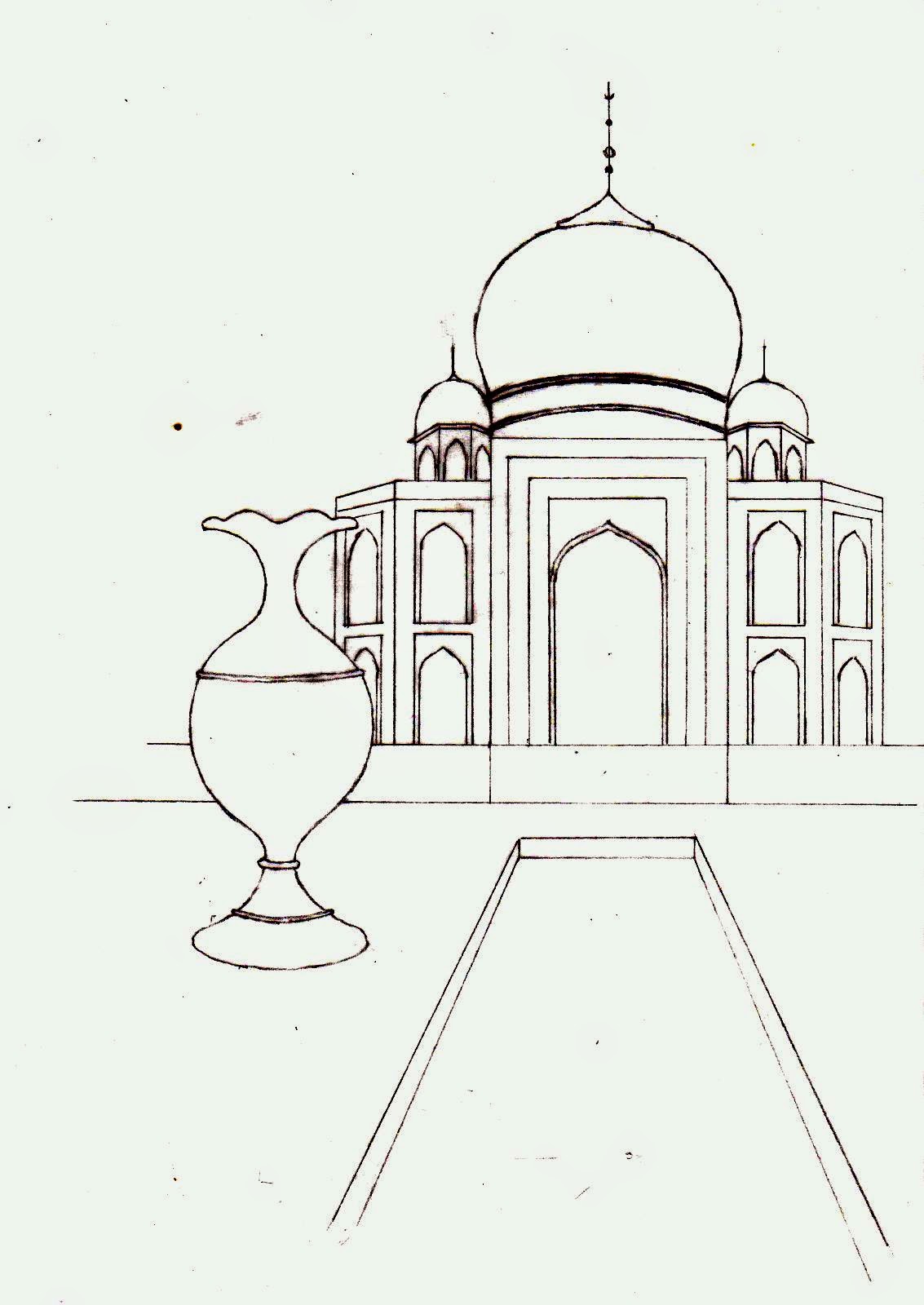 Second comes a tonal drawing, developed from the line drawing. Now if my past efforts are anything to go by, this is the point of highest enjoyment. Wisdom would indicate that I should stop at this point, but in for a penny, in for a pound, as the saying goes. Yes, I put paint to paper ..... sort of. 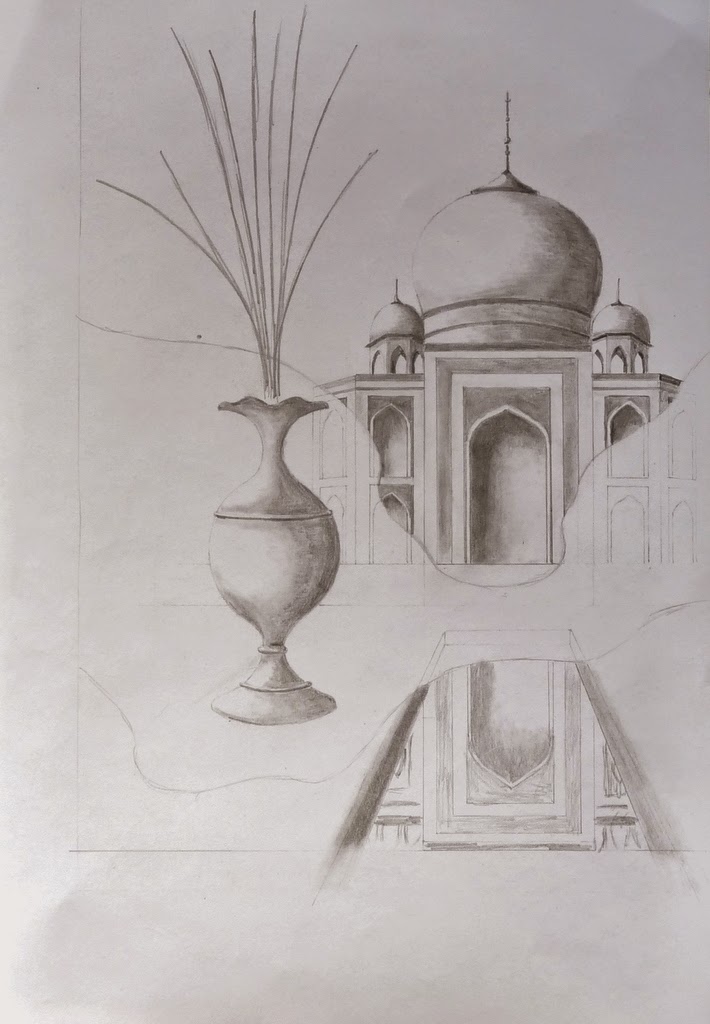 So, third comes the completed effort. It was unclear to me just how I was going to treat certain features of this picture, but if (as did by happy accident) the piece took on some aspects of fantasy, then I would not be displeased. The important things about this picture are that I enjoyed the very experience to the end; I did actually complete it; and although I will now file it away out of sight, I felt I did learn from the experience. 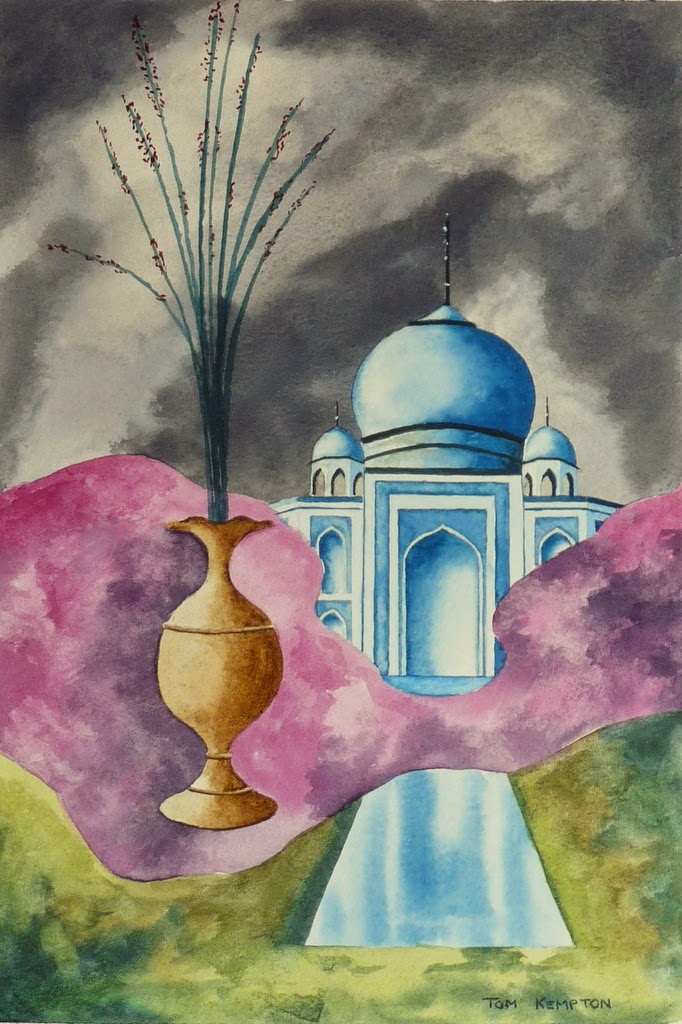 And now I can turn to other matters.

[Note:  I do not know how a reader will be viewing this picture, but the original colours are quite deep and strong - quite the opposite of pastel.]
Posted by Tom at 18:06