An Evening with Friends

I am deaf.  I am not as deaf as the proverbial post, but deaf enough not to be able to hear birdsong; deaf enough not to be able to make sense of what is being shouted at me;  deaf enough not to be able to listen to television, cinema or music.  However, a year ago I acquired a pair of smart hearing aids from Specsavers of Bishops Stortford, UK, who also supply my specs.  It has to be said that total hearing has not been restored, but things are far better than they were.  Now being deaf is not all bad, certainly not.  I can, on occasion, remove these "aural apparati" and retreat into a muted, sublime world of my own.  Also, they are barely visible which saves me from being accosted by anyone who feels moved to say,  "Do you know your hearing aids are showing?" as if I had left home that day having forgotten to don my trousers.

Unless it is requested otherwise I would like, respectfully, to pick up on a comment from time to time as a way into, or as an inspiration for, a future post.  Now in one comment I have been warned not to do posh music, but I would find this restriction rather sad and inhibiting.  After all, music is an art form that is part of mankind's very soul.  Simply because posh music has been called "classical" does not fundamentally distinguish it from all other music forms.  Yet that particular word creates an artificial divide in the mind that is more apparent than real.  But such is the power of words.  Much of western, so-called "classical" music has its origins in folk music, popular music of the day.  And what of "classical jazz"?

I recall that when I studied music at school, as a teenager, a small group of us were asked to list some "classical" works to be compared with music of another ilk shall we say.  This other music was chosen by a group of boys (it was a boy's only establishment) who had no declared interest in "serious" (another divisive adjective) music.  The aim of the exercise was to compare our musical choices, discuss them, and reach some common appreciation of their value.  I have to say that we did very badly.  I learned two important lessons from that exercise.  First, we chose compositions that were poor examples of what we were trying to demonstrate.  As our music master repeatedly said, "You could have chosen......" this piece or that.  There had been a marked lack of discernment on our part.  As music students, we had chosen pieces that had been guided by our intellectual considerations.  We had made the fundamental error of assuming that music needed to be understood in order to be enjoyed.  Second, we had failed to appreciate that our opposing team were not going to come round to our way of thinking anyway.  There was an ego problem involved, and that problem existed on both sides.  Neither side would give way.  The debate was not about music, but about winning, a trait that has caused so much grief in human affairs.

There will always be people who do not like this kind of music, of course, and that's fine, just as there are people who passionately love "classical music" (strictly a term which applies to music written within a narrow time span by, for example but not exclusively, Mozart, Haydn and Beethoven.)  The reasons for liking or disliking any style of music are many and various, if they can ever be defined at all.  I am not trying to convert anyone, not trying to win anyone over.  I no longer choose to fight those battles.  Instead, I would like you to come along with me for a short while. Let me set the scene. 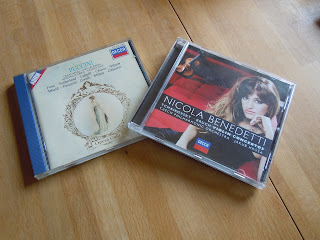 It is Saturday evening, and a lovely day is ending with a chilly sunset.  A light, delicious dinner has been consumed, and we are preparing to relax in front of the television.  As is usual, there is nothing being broadcast that is remotely of any interest, and so we opt to listen to some music, our CD player connected to the television speakers.  (We used to have powerful, independent speakers, but when they and my hearing  began to decline,  the speakers were disposed of.  I'm still here though.)  Now viewing television requires little effort in concentration, whereas listening to music requires constant effort.  First my hearing aids must be reprogrammed, a simple enough adjustment, then my stethoscope-like widget needs to be arranged on top of the hearing aids and then constantly adjusted for volume and position.

I am reclining on the larger sofa, a glass of wine to hand, whilst Lucy sits on the smaller sofa, knitting perhaps, with Molly either curled up on her lap, gently snoring, or periodically investigating the possibility of snuggling down beside me.  The curtains are drawn and the lights are dimmed. Ssssh!  The music is about to begin with Arias from Puccini's "Madame Butterfly", "Tosca", "Suor Angelica", "Turandot" and others.  Puccini speaks to the heart, not the mind, and the heart responds, falteringly at first then with ever-increasing surety.  As the music swells, its passion mingling with, and absorbing in joyous union, that which the soul offers in return, I become aware of something else;  a world beyond definition that demands something of me.  It demands an opening up, a releasing, recognition.

Silence, a shuddering, indrawn breath.  Self-conscousness.  But all is not yet finished.

"Tchaikovski's Violin Concerto" (in D major, op.35) a.k.a. the 'lonely man's concerto' will complete the evening's listening.  This piece has been chosen, in part because this is a much loved concerto with all Tchaikovski's passionate intensity, but also because the work is being performed by Nicola Benedetti.  Recently, I heard her stunning performance of the ever-popular "Bruch Violin Concert" on television as part of the BBC's Promenade Season of concerts.  She is well worth listening to.

Finally, and almost too soon, the performance is over.  There is a kind of joyful 'gathering up'.  One looks around to share a smile with rest of the audience.  Yes, they are there, in the mind and memory at least.

Let me get your hats and coats.  Now come on people, please don't tell me nobody was interested.