First, the distant past:-

I was raised in a family, the well-educated male head of which, espoused that particularly intolerant form of christianity, puritanical, born again fundamentalism.  Now let me say here and now that this is not going to be a diatribe about my childhood and parents. However, I do need to set a background against which I can display a much more recent event;  a trip to the Abbaye de Boquen.

I was thoroughly embedded in the Church, having been christened in the Church of England, enrolled in the Salvation Army, baptised in the Baptist Church (just my luck that the water heater was out of commission on that occasion - and it was a full, midwinter dunking!) and attended, at an earlier age, various London City Mission halls.  Yes, I had the job lot.  No-one was going to keep me out of Heaven.  Church activities five evenings a week, sometimes six, and five attendances on Sundays.  It must be said that although this way of life wasn't entirely of my choosing, I did grow into it and gained quite a wide experience of church life.  One form of religious observance, however, that was totally forbidden was attendance at a Roman Catholic church.  None of that damned popish stuff this young fellow-me-lad.  Ooooh no!  (Incidentally, there's a small point of illogic that has been conveniently glossed over here.  I'll leave that with you for prep.  Submissions before the next post, please.)

Now there were two activities that gave father a great deal of pleasure.  And who would deny him? He was after all a very sick man.*  One activity was to sit at an old pump organ in the back parlour, belting out hymn tunes to which he and mother would sing, whilst I listened in.  (Heaven only knows what the neighbours thought.)  My father could not read music, but he could hold a tune well enough.  This meant that his harmonies were 'improvised'.  (Lovely, forgiving sort of word that.) Unfortunately, many hymns to his liking were written in a minor key and, therefore, had a rather melancholy, nay, even mournful sound.  His 'improvised' harmonisations, however, were always rather upbeat.  The effect was truly, truly bizarre.  Notwithstanding the offence to which my ears were thus subjected, I did get to learn a wide range of some of the finest hymns written.  I can still remember the tunes, but I struggle for the words.

The second activity in which he indulged was to invite a friend round, usually a London City Missionary, and engage in a process of theological discussion which I can only describe as a bible slanging match.  Consider if you will the following proposition.  Once your soul has been 'saved' it remains in that state, regardless of how deeply you fall into sin thereafter.  (Oh c'mon!  You must have sinned.  Not even a little one?)  Father would totally refute the proposition, as he glowered meaningfully at me in the mirror suitably positioned on the wall.  If the opposition disagreed with him, (Heaven forfend!) there would follow the process to which I have already alluded, in which biblical texts would be quoted either in favour of, or against, the proposition (or even the texts themselves) in an ever-increasingly loud and frenetic exposition of the subject in hand.  Needless to say, I learned a great deal about the King James' version of the Holy Bible.

The point of all the foregoing is to demonstrate, that without a shadow of a doubt, when it came to the Church, theology and the Bible, I felt I had become a bit of a whizz-kid.  Less kindly souls might also add that I had become other things as well, but we'll let such arrant judgementalism take its place in the dark pit of forgotten speculations.

* He shuffled off his mortal coil, and sought heavenly pastures new when I was 16 years old.  With his death I began the process of disentanglement from religion.

And now to the recent past:- 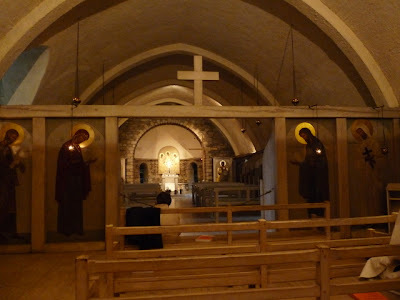 Some years ago we visited the Abbaye de Boquen which is situated not too far from here.  I have always had a certain predisposition towards monasteries and convents.  It was to be after a lapse of some ten or eleven years, if memory serves, that we returned to the Abbaye in June of last year. On the previous visit I am certain there was no rood screen in place.  Thus the visitors and the occasional, meditating monk were in the same space.  In the intervening period, a rood screen had been erected on which appeared images of the four evangelists, Matthew, Mark, Luke and John. We sat, and I settled in the silence to contemplate.

..........The images of the evangelists began to shimmer, then faded away, slowly.  Beyond the rood screen there were figures, a vast throng of people clothed in golden raiment, their faces turned upward in adoration.  They radiated a plenitude with which my sense of my own two-dimensionality compared but poorly.  Movement of a kind, inexplicable, a world beyond.  A whispered sound that made no sound at all.  Yet in my empty state of listening, I heard it clearly.

"You have not even begun to scratch the surface of Christianity."


A few moments more.  The throng have passed away, and the rood screen has returned to normal..........


(Images from a meditations journal)

Something of me, some unidentifiable awareness, had slipped to a new level.  Here was yet another beginning.  I 'knew' nothing, and that was where I needed to be.  I felt gloriously unchastened, for that sense of joyous acceptance is part of the nature of true consciousness, the "timeless witness".  Another beginning? Yes!  But not a return to some previous beginning.  This beginning was new, as all real beginnings are.