Over the next three days, the centre one of which was my birthday, our forays into Amsterdam became more intensive making more use of the tramcar system. We upped our usage by buying 48 hour tickets rather than 24 hour tickets, or single-journey tickets. Why not? After all, one could travel all day, anywhere, on one ticket. That's even better than the Paris Metropolitan. Thus it was that on the Wednesday, we went across town, having lunch at the Rijksmuseum where I had that most delicious of soups, pickled chicken. Now I am somewhat at a loss to describe this delight because, although I can find pictures on the internet, I can only find recipes for 'chicken soup with pickles'; not the same thing at all! (Incidentally, they had some quite good pictures in the gallery!!) At the completion of our day's sightseeing (what a touristy word that is) we went back to our apartment to prepare for the evening session.
We have a couple of friends in Amsterdam who annually spend time in France very close to where we live; just down the road in fact. One is a lovely sculptress, the other an equally lovely singer in the classical mode. They had invited us to dinner, scheduled for six o'clock, after shorts and nibbles. Now it is quite common for the Dutch to eat that early, around two hours earlier than the French. The result being that on this occasion we went to our planned concert after dinner, whereas after our latest trip to Paris we had dinner after the concert.
After a delicious vegetarian meal of rice and spiced lentils, our friends walked us to the Concertgebow (concert hall), situated near the Rijksmuseum. What a wonderful performance was going to be our lot. As we entered and had our rucksacks removed, there was a wonderful buzz of chatter around the hall. Now the performance area itself was somewhat aged compared with some we have visited, but none the less pleasant for that. Our seats were behind the orchestra, rather than in the main pit (is that the right word?) or in the gallery. This was ideal for me with my hearing difficulties. Then came that moment, on time, when the audience suddenly quietened - that is always a wonderful moment - and onto the stage came the soloist and the conductor ready to perform the Bartok Violin Concerto. Her performance was brilliant, for which she deservedly received a standing ovation.
The interval followed, but we remained in our seats enjoying the bustle and release of tension, the happy reunions of various people around us, just enjoying the looks of happiness on their faces. After the interval, when the orchestra had retaken their positions, everyone settled down once more in a state of excited expectancy. I was on a real high, these experiences of live music, so reminiscent of those times - now so long ago - when I worked with young peoples' orchestras in England, a comparatively rare event. I knew that we were in for a feast when I counted ten double basses and twelve 'cellos, so typical for a Shostakovitch symphony; in this case it was his 11th. symphony, "The Year 1905." This symphony was written in commemoration of the Russian revolution of that year when hundreds of Russians met in front of the Winter Palace in St. Petersburg to peacefully petition the Tsar. Over a thousand people were killed when the Cossacks opened fire on them. It is a relatively long symphony, but one whose polished performance brought the house down. I cannot adequately express my feelings here, but it was a performance that I will remember for a very long time.
I will skip what we did during the following day, until the evening arrived. This was to be my surprise present for the day. Off we went, by tram, towards what turned out to be a rendez-vous with a canal boat taking passengers (six in all) on a candle-lit cruise of the Amsterdam waterways. Wine and cheese were supplied for our delectation. I deliberately left my camera behind on this occasion. It had been raining, again, and it was dark. The purpose of the cruise was to spend a happy time with Lucy, not to try to take smudgy pictures through wet, distorting glass. So I fear I cannot show you pictures of that happy evening, but here are a few shots, taken in daylight, of places we passed. 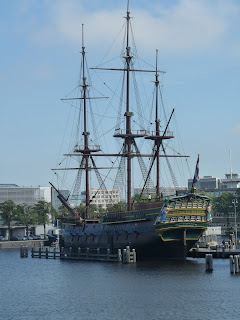 It is said that if one kisses under a bridge, of which this is an example, one stays in love for the rest of one's life. That's our future happiness settled then! 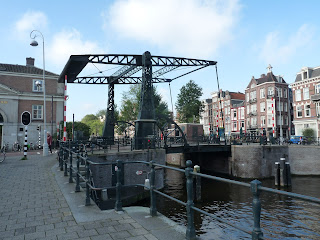 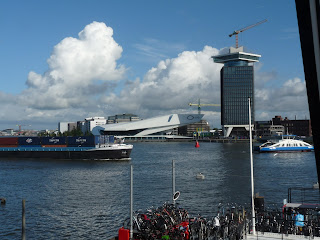 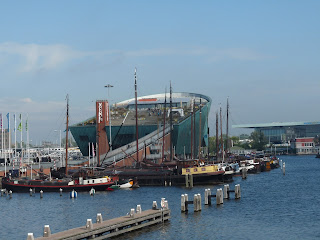 This is the Nemo science centre. 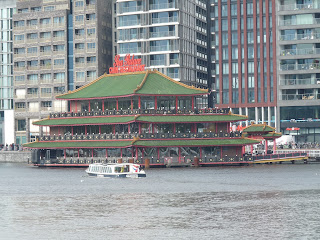 There is an interesting little story, told to us by our guide, that on the opening night of the floating Chinese restaurant, built to accommodate 700 guests, that number of Dutch diners duly arrived. Perhaps someone hadn't done their homework, but the restaurant calculations were based on Chinese people, not Dutch. The result was that the restaurant sank sufficiently far to flood the lower floors. Alright! The story might well be apocryphal, but our guide enjoyed telling it.

Passing now to Friday, I had by now begun to develop a cold, possibly as an indirect consequence of a very warm concert hall, followed by chilled, damp night air, and our trip on the waterways. Catching a cold (well one doesn't actually catch it, does one?) causes me concern, but only because I almost inevitably contract a cough as a consequence. On this day, we decided to visit the Ship Museum. That, however, is a visit which Lucy will talk about on "box elder." In the evening we once again met up with our Dutch friends whom we took to a delightful Indonesian restaurant. The usual things were on the menu, curried chicken, a beautifully spiced beef, various vegetable dishes and rice, all washed down with a lovely Viognier white wine.
That ended the three-day-birthday celebrations. We had one more whole day in Amsterdam, but that will have to wait until next time when I will talk a little about our final meal, and Lucy will talk about our trip to the wetlands just north of the capital.

Footnote:      Amsterdam is full of feeling, even that of perhaps having had a little too much to eat. 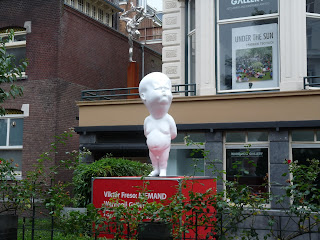