We had now reached the final, full day of our stay in Amsterdam. Our trip out to Volendam and the surrounding wetlands north of Amsterdam did go ahead, regardless of the cold virus I had attracted. As I said previously, that visit north is something Lucy will describe in due course. I will begin this post with our return to Amsterdam for our final evening meal at the restaurant we visited earlier in the week, Ruering on Lutmastraat.
We began with an aperitif, a Portuguese Muscat I believe, followed by a 'ceviche mackerel', a lovely entree in which the "juliennated" (if there is such a word) vegetables were warm and al dente, resting on the lovely, marinated and filleted fish. Our main dish was a rib of beef cooked to perfection, which we shared from a platter. There was enough meat cooked to my taste and enough to Lucy's more 'blue' taste, to satisfy each of us. Again there was the stuffed Yorkshire pudding accompaniment, and one other ingredient. Now for those who do not like garlic, please look away if you wish. For us, garlic is always a joy to eat. On this occasion it was half a garlic bulb with its top removed of course, baked with the meat. The scrummy meat juices were served in a separate jug. Now I have had increasing reservations about my favourite Bordeaux wines of late. Whether it is indicative of a change in my palate, or whether there has been a poorer wine produced by that region, I'm not sure. I did however express my apprehensions to mine host who offered us a Cabernet Sauvignon red from Italy. Oh how I wish I had noted the name of that wine. It was one of those delightful tipples that slips down so easily that a bottle can be consumed without noticing it. But that was not to be on this occasion. Finally, having decided to pass on the dessert - I often do that - I had coffee and an unadulterated Scotch, purely for medicinal purposes you understand. It was a happy couple of Brits who walked 'home' that evening.
The following day, a Sunday, we left our apartment, and took a tram to the central railway station, Amsterdam Centraal. From there we travelled to Bruges (aka Brugge) via Antwerp. After a severe coughing bout earlier, I was less inclined to order my memories of this and the following three days of our holiday, in the way I had done for the Amsterdam phase. I trust that any apparent randomness or haphazard reporting will elicit your understanding.
We arrived without any certain knowledge of where our accommodation was situated. We were put on a free bus and taken to the town centre, where (we were told) we would be given instructions. Those instructions from the bus driver amounted to nothing more than a kind of 'go thataway!' Whilst Lucy went off to make further enquiries, I waited with that bane of a suitcase and watched, somewhat sporadically, a local troupe of ladies performing belly-dancing in the town centre. Now it has to be said that belly-dancing is not an activity that I can claim to be knowledgeable about. However, I do seem to understand that when a lady wiggles her shoulders, other parts of her upper torso are meant to wobble in unison. That didn't happen on this occasion. Clearly, the ladies enjoyed a good style of living, and there's nothing wrong with that. However, it did mean that there were areas, further down, that went into barely (I use that word advisedly!) controlled wobbles that I think were meant to stay relatively stable. I think that now is a good time to close this subject, before I dig a hole too deep from which to climb. At the end of their performance, they received polite rather than enthusiastic applause. I thought that was a pity, because it takes some bottle to do a performance like that. There are worse ways of spending a Sunday afternoon.
We set off once more to hunt down our accommodation, our journey taking us along some pretty canals. 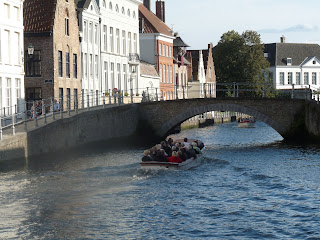 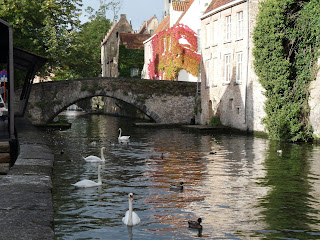 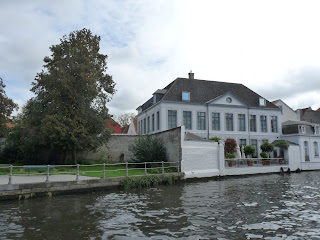 Just as we were approaching the vicinity of our haven of rest, we ran into a Sunday street market. Street markets I love; vocal entertainment at such, I loathe - loathe with a passion! We had almost decided to enter a cafe and get some much needed refreshment when to our horror, a wind/brass band with a female player/"singer" decided to let rip.

"Could you repeat your question, please, dear reader?"
"No! I didn't say she sounded like a scalded banshee!"
"Mmmmmm?"
"It was much worse! And the almost all male band had bags of enthusiasm, but pretty
well no musicality. Oh our poor ears!"

Needless to say, we passed on the refreshment, and hurried on, at least as quickly as the crowds allowed, to our bed and breakfast accommodation. So relieved were we when we arrived that we hardly noticed the broken mains sewage pipe awaiting pumping-out and repairs a mere few metres from our front door. And this was one evening we were dining in!
Well I began with food, and now I will end with food. This Sunday evening was one of three of which the restaurant downstairs were open. On the menu was cabbage soup, followed by a fish stew which looked suspiciously like more cabbage soup with fish - cooked of course - floating in it. Now I do not wish to sound unkind, no really! It was good wholesome food, and it saved us going hunting for a restaurant, which in turn would have meant confronting the banshee again. The problem was.......do I really need to go into this? Cabbage soup can, and in my case did, have unfortunate repercussions on the digestive system. Let me just say that for at least twenty-four hours, our range of exploration was limited to areas that could offer good toilet facilities.
In the next part of my tale, I'll explore some random memories of Bruges, and its public services. Until then.......